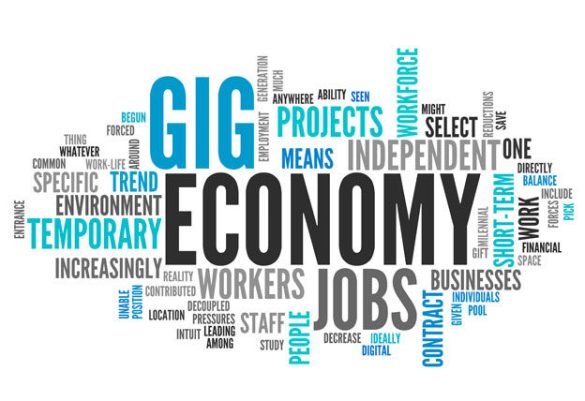 I ran across this article on the Workforce Institute Blog site and wanted to share it with my readers.  I have spent a lot of time with Bob and his team and really value his insight.  I think you will too.

Today’s post is courtesy of our board member Bob Clements.  Bob is Senior Principal at Axsium Group,  a leading workforce management consulting firm.

The gig economy is a hot topic with human resource and operations professionals around the world. It’s now estimated to make up about 30 percent of the workforce in North America and Europe with numbers growing steadily.  At its core, the gig economy isn’t a new concept. Contingent and temporary labor has been around for as long as people have earned compensation for work. What’s different today is the technology involved. It’s made it much easier for temporary workers to find gigs and companies to find the giggers.

Though there are new opportunities for businesses and workers, it’s also brought on some controversy. When we consider lower wage, hourly jobs like those often found in the retail and hospitality industries, the gig economy has the potential to make what’s perceived as a problematic employment situation even worse. Imagine a scene where retailers, restaurateurs and hoteliers jettison part-time employees in favor of gig workers who must bid against each other for shifts. If you think these industries get a bad rap now because of poor pay and inconsistent hours, imagine the public outcry if a situation like this one played-out.

Today, many of the retail and hospitality clients I work with recognize how important their associates are to the success of their business, so it’s unlikely that such a development could take place. Stores, restaurants and hotels depend on customer service; a race to the bottom with wages will directly impact the customer experience, resulting in negative consequences to earnings. Instead, to drive financial performance, they’re seeking ways to give employees more hours and better training to increase retention. I believe the gig economy can do a lot to help promote that goal. Here are three potential scenarios that can work.

The first scenario creates a gig-like economy inside of your company by making it easy to share employees between locations. Today, administrative rigor and out-dated technology make it difficult for stores, restaurants and hotels to do this effectively.

By creating an internal gig economy, a casual dining chain, for example, would open up shifts (gigs) to all locations in a certain geographic area. Team members would go online and build their schedules by picking up the gigs at locations and times convenient for them.

As with each scenario, rules would be put in place to ensure employees only pick up shifts they’re qualified to work, that comply with all applicable laws and policies, and can’t create overtime without approval.

Many retailers already use seasonal staff to flex up and down at scale. A good example of this is Target in the U.S. At Christmas time,  Target hires around 100,000 people, on top of their 325,000 other employees. Though the gig economy is similar to seasonal hiring it represents a shift in mindset and a better use of technology, particularly related to the mobile scheduling tools used.

The scenario for a retailer adopting into the gig economy, would look something like this: A retailer would band together with other retailers that have complementary seasons. For example, an electronics retailer that hits its peak in December, an office supply retailer with a strong back-to-school peak and a DIY retailer with a spring planting season could form a “gig coalition.”

Each retailer would staff itself with the full-timers and part-timers necessary to handle its off-peak demand. The coalition would also start to create a pool of seasonal workers that could transition from retailer to retailer as seasons change. Shifts would be posted and shared where workers in the seasonal pool could pick up gigs, giving each retailer coverage at critical times of their individual businesses.

The benefit for retailers is that once the seasonal pool has been on-boarded and trained for the first season, the same employee is ready with a little updated training for subsequent seasons. The benefit for employees is that they have steady, reliable work during the most exciting time of each retailer’s season.

Arguably, the second scenario is easily extended to create a “private” gig economy. Here companies share associates all year, with employees picking up shifts at retailers in the gig coalition whether it’s in-season or not.

Today, employees work multiple jobs to make ends meet. Both the employee and the employer have to manage conflict. In the private gig economy, known, trained employees can work across retailers and are empowered through technology to manage their schedules and avoid conflicts between employers.

There’s no doubt that the gig economy is set to change the way the retail and hospitality industries manage their workforces. Though there are a number of scenarios that can work, applying the right processes and technologies to take advantage of the changing workplace will help to achieve substantive advantages – for employers and their workers.